Project Manager for Pennsylvania Hyperloop Study – “If I was a betting person, I would say [Missouri] would probably be the first to build a commercial system in the U.S.”

Hyperloops ‘up and running by 2028’? Becahi grad is promoting one of the largest companies behind the tech

A Virgin Hyperloop One recovery vehicle and a test sled sit on rails during a 2016 test in Nevada. The Pennsylvania Turnpike Commission voted in April 2019 to fund a feasibility study of a hyperloop that could carry travelers from Pittsburgh to Philadelphia in about 30 minutes.

As Pennsylvania jumps aboard the hyperloop train, a former Lehigh Valley resident has a leading role in promoting what experts believe could be the next big breakthrough in transportation technology.

Ryan Kelly, a 2004 alumnus of Bethlehem Catholic High School and a former Bath resident, is the head of global marketing and communications for Virgin Hyperloop One, the only company in the world that has constructed a full-scale test tube for the high-speed mode of transportation.

Kelly said he was working at a marketing firm in New York City when he began looking for new challenges.

“I asked myself, ‘What’s next? What’s the next thing that’s going to change the world going to be?’ ” Kelly said.

He believes the answer to that question is hyperloop technology. First envisioned by entrepreneur Elon Musk in 2013, hyperloops combine the technology of vacuum tubes and high-speed trains to produce an efficient land-based travel system capable of reaching 670 mph.

Under the model proposed by Hyperloop One, bus-sized pods capable of carrying up to 40 passengers would leave their station just seconds or minutes apart from one another. The automated system would eliminate the dangers of human error, and pods would take ramps off the main tubes to stations capable of docking multiple pods at the same time.

The tech would allow someone living in Western Pennsylvania to commute to Philadelphia in about 30 minutes. If linked with another potential hyperloop connecting Chicago to Pittsburgh, a commuter in the City of Brotherly Love could reach the Windy City in an hour and 15 minutes. By comparison, that beats the drive time between New York and Philadelphia.

“We can travel at the speed of flight at closer to the cost of trucking,” Kelly said.

Pennsylvania expressed interest in the concept last year when the House passed a resolution calling on the Pennsylvania Turnpike Commission to partner with PennDOT and explore building a hyperloop connecting Philadelphia to Pittsburgh. The commission was already considering the idea when the resolution passed, and this month it agreed to pay up to $2 million for a feasibility study, said Barry Altman, project manager for the commission’s Hyperloop Planning Study.

The study, Altman said, would consider potential stops in Philadelphia, Harrisburg, Pittsburgh, Wilkes-Barre and Scranton, Altman said, following the Turnpike and Northeast Extension as much as possible. Since the commission already owns the rights of way along the highway, it should ease the considerable construction costs of a potential path.

The feasibility study isn’t due until April 2020, and Altman stressed no official cost estimate for the Pennsylvania project exists at this early stage. However, estimates for other potential hyperloops have estimated up to $50 million per mile of tube, he said. At that rate, the cost for a route from Pittsburgh to Philadelphia could reach $15.25 billion.

But that early estimate isn’t scaring people off, Altman said. Unlike Hyperloop One, the commission isn’t focusing on the passenger potential, Altman said. Passenger travel would require life support systems and would need to undergo more regulation and testing, which will take time. Cargo, however, would be an easier hurdle to clear, Altman said. Given the demand for overnight deliveries, the state anticipates investors would be easier to find if the promises of hyperloop can deliver.

“It depends on what the financial projections look like,” he said. “There’s not a dearth of money. It’s a matter of how you want to structure it — public or private.”

Pennsylvania isn’t alone in this endeavor. Outside the United States, governments in China, India and the United Arab Emirates have approved their own projects. Groups in Ohio are considering routes that could connect Chicago, Columbus and Pittsburgh, and officials in Texas have called for a study linking Laredo, Austin and Dallas. Missouri appears to be the furthest along in the U.S., having already conducted a feasibility study and ordering an environmental impact study as well.

“If I was a betting person, I would say they would probably be the first to build a commercial system in the U.S.,” Altman said. 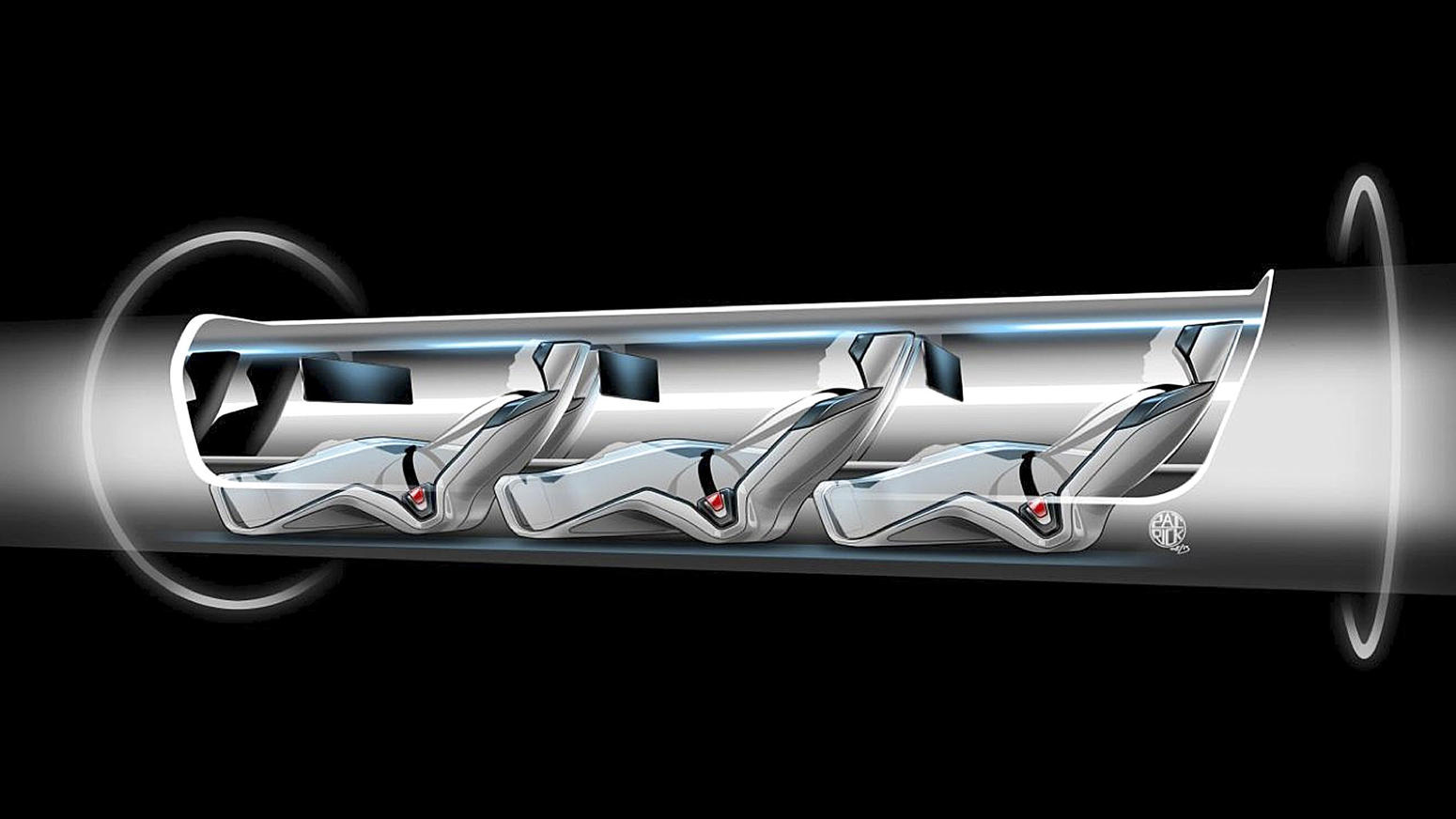 An sketch released by Tesla Motors shows a Hyperloop capsule with passengers onboard. The Pennsylvania Turnpike Commission is considering using the system to deliver cargo initially, which could help deal with the cost of the project. (AP)

Last week, U.S. Secretary of Transportation announced the creation of a Non-Traditional and Emerging Transportation Technology Council that will examine regulation and jurisdictional gaps for technology like hyperloops, autonomous vehicles and tunneling.

“The news is extremely promising,” Kelly said. “We’d like to see a passenger system up and running by 2028.”

Kelly believes hyperloops have an advantage over self-driving vehicles, another technology that has captured the imagination of entrepreneurs and government officials alike. The closed environment of the hyperloop tube means the pods don’t have to worry about other vehicles or pedestrians getting in their way. That should make it easier and safer to develop, he said.

If hyperloops do become the next generation of high-speed travel, the social ramifications are hard to imagine, Kelly said. Rural areas that are now hours away from cities could become viable suburbs if they get their own hyperloop stations.

It’s unclear if truck congestion would ease or grow worse, Altman and Kelly said. While long-haul trucking would likely get replaced by tubes and pods, it could create the need for more trucks locally. All those goods moving into ports and hyperloop stations would need to be moved to warehouses capable of distributing goods to stores or directly to people’s homes.

“This doesn’t resolve the matter of the last mile,” Kelly said, using a term for the last stage of a logistics chain.